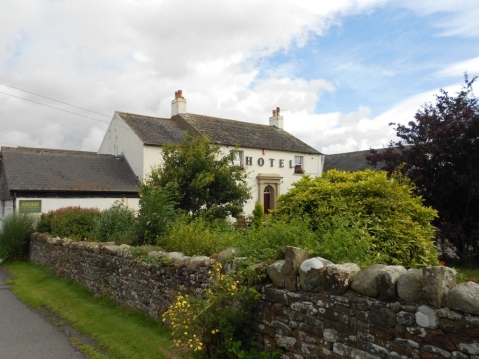 Well, we got to our destination, even though we had a flat tyre to contend with near the end of the journey between Patterdale Youth Hostel and Wheybrigg Hall Hotel.

Was I going to change the tyre when we’d just got there? Was I heck as like!

Coffee, freshening up and fodder were the respective orders of the day once we’d checked in, found our room and flopped for a few minutes.

After a good meal, cider or beer and a shared sweet, we retreated to our room to flop some more and unwound with Yesterday channel’s latest in a re-run of guitar players in action at the studios of the BBC.

Sunday morning came around a bit too soon, but I wasn’t going to pass up the chance to try a bit of haggis as part of my breakfast platter!

Quick enquiries at the hotel regarding a tyre supplier came to nothing, so it was time to pack, put the bags on the back seat and then try to get the wheel changed.

Which was easier said than done. The wheel nuts wouldn’t even budge as I tried to ease them before putting the jack under the car to raise it up to facilitate changing the wheel.

So it was time to call out the road rescue service. “Someone will be with you in about an hour” was the verdict when I made the call, but a van pulled into the car park just twenty minutes later and did the deed – although the chap that came to do said deed had a fair bit of trouble in getting those darn wheel nuts shifted too…

As expected, there wasn’t a tyre place open in Wigton on a Sunday, so it was time to head over to Workington in search of the local Kwik-Fit.

I hadn’t been to Workington for about 27 years (to Cumbria Rock Festival to be precise), so finding Kwik-Fit was always going to be a case of winging it. Or was it?

Caroline’s phone gizmo came into action once more and Kwik-Fit was found, entered and the problem explained.

The wait was an hour, so we wandered into the town centre in search of coffee and a Sunday paper. Finding a copy of The Observer and a couple of cups of Greggs coffee was easy, but what I didn’t expect to find in Greggs was a guilty pleasure that was last tasted about fifteen years ago when I lived in the North East.

Peach melbas. A cake that has to be tried at least once – fondant icing on the outside, cream on the inside and a piece of peach inside the bottom crust. Naughty, but nice!

Polishing off the coffee in Kwik-Fit’s waiting area happened at the same time as the car was ready, so our stuff was taken off the back seat and packed into the boot in readiness for setting off to do the rest of the planned route.

Which is when it started to rain. And then some. I’d thought about having lunch in St. Bees, but the combination of rain and lack of parking put paid to that idea. We kept on going and tried in vain to find the airfield that was signposted with a brown tourist sign.

No dice there, so we kept on going and headed into Broughton-in-Furness to try our luck there. No dice again there as all of the parking places surrounding the cafe we’d spotted were full.

We kept on going though and then I had an idea. Have a late lunch at Wilf’s Cafe, an old haunt over in Staveley. It took a while to get there, but the big breakfast roll I had at 3pm went down well, as did the big bowl of veggie chilli that Caroline ordered. And the coffee? Probably some of the best coffee we’ve had in a cafe for years!

As I’d done so much driving, an on foot diversion into Wheelbase cycle emporium was always going to be on the cards once we’d decided on heading to Staveley. Caroline took a look at a few mountain bikes and then bought some socks (decidedly cheaper!) whilst I looked at and handed over a copy of Stephen Frear’s film about one Lance Armstrong.

And that was about it as we pointed the car in a homeward direction. Plans on visiting our local farm shop to get something for tea though went out of the window as we hit a five mile or so tailback of stationary traffic near Long Preston. Caroline’s gizmo came in useful once more as it got us around the accident blockage and back home.

The eventual evening meal? A good old Yorkshire favourite – a curry out! 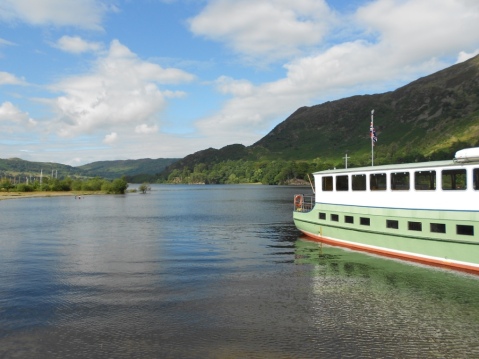 Ullswater from the steamer pier

Watch out, there’s squirrels about! 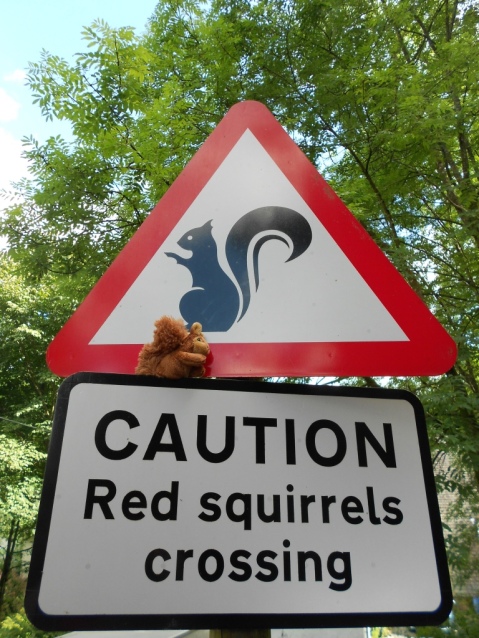 The return of Tufty? 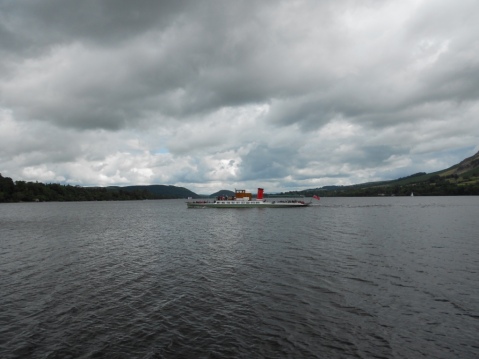 Ullswater on a grey day

Same day, but with added sun!

With three days to spare, a couple of last minute accommodation bookings were made, the car tanked up with unleaded and a couple of bags packed for a Cumbrian road trip.

Despite spending so much time in the Lake District since my first visit back in 1973, there are parts of the Lakes and the surrounding area that I don’t know that well, even after my years as an outdoor instructor and gear tester for a number of climbing, walking and cycling magazines.

Although I’d run off a route card from the AA’s Route Planner software, it wasn’t needed as the car was pointed towards Skipton, Kirkby Lonsdale, Windermere and the right turn that took us to Troutbeck for a drinks stop at The Mortal Man.

Once refreshed, the car was pointed towards Kirkstone Pass, Brotherswater and then into the car park at Patterdale Youth Hostel. We’d got a room for the night, arrived earlier than anticipated, checked in, dumped the bags and then went a wandering.

Which is why we ended up in Glenridding. I’ve used Gillside Farm campsite on more occasions than I care to remember and it would have been a good place to overnight had we been in camping mode (Caroline was getting physio for a back problem at the time, so it would not have been a good idea to break out the camping gear for the weekend).

I did show Caroline the campsite though before we made our way around the top of the village to have a drinks stop at The Traveller’s Rest, a pub first visited back in the summer of 1975 when a few of us were over in the Lakes for a spot of walking, sightseeing and sword fencing.

It was tempting to stay at The Traveller’s Rest for another pint, but that would have been a bad move given that I tend to stick with one drink per night at the best of times. So it was back to the hostel and to the member’s kitchen to cook up some posh meatballs and accoutrements bought at Booths in Kirkby Lonsdale earlier in the day.

Although we were checking out of the hostel on Saturday morning, we were allowed to leave the car there whilst we went exploring. The plan was to head somewhere that I’d passed through on several occasions, but had never stopped in and taken a walk around.

I’d been on the Ullswater Steamers before, but only as far as Howtown before. Getting the steamer to Pooley Bridge was therefore a new experience, especially as that was the village I’d never stopped in.

The steamer was busy, but not packed out. Pooley Bridge on the other hand was busy with quite a few Geordies and Mackems in evidence (I recognised the accents after working in Newcastle-upon-Tyne and three years living in Sunderland whilst taking my degree course).

Other accents and languages were also evident – Punjabi, Hindi, American and a variety of Eastern European accents were amongst those heard.

With the £ exchange rates being what they are at the moment, all parts of the UK are coming into play as tourist destinations once more. How long it stays that way after March 2019 remains to be seen!

As Pooley Bridge is a small place, walking around didn’t take too long. Lunch was easily found in a local deli and eaten in the village square. The wait for the steamer back was taken up with a conversation with an American family on the merits of visiting Durham over York and the merits of an orange coloured politician!

Once back at the car, it was time to Boo Boo * and get going towards the hotel we were staying in near Wigton.

We did need a route card for this one, but there was a small problem near the end of the drive that meant that the navigation tool on Caroline’s phone was brought into play.

After a little bit of driving around, we found our hotel for the night, but realised that we had a small problem. I’d heard a not-quite-familiar sound coming from behind me on my side of the car and the reason was evident when I pulled into the hotel car park.

The origin of Boo Boo? Watch The World’s End!