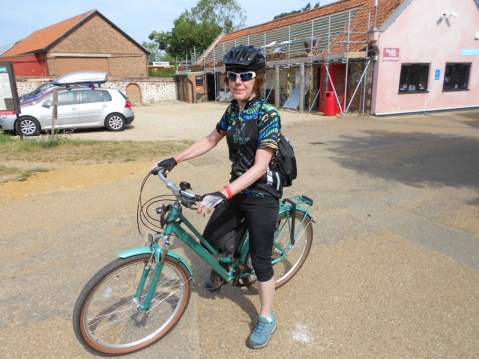 Ready to roll – Caroline on a pretty good hire bike

Just part of the beach at Wells-next-the-Sea

The tide is low – and then some…

Wash and go. Or wash and boldly go?

It’s Tuesday on a hot week in June and Caroline and I are heading off in different directions. Although Caroline had taken her cycling kit, she hadn’t brought a bike.

Fortunately we knew that there was bike hire available at Deepdale Backpackers and that the bikes in question were all very much on the new side. After making her choice of steeds and gearing up, we arranged to meet at the beach cafe at Wells-next-the-Sea.

One plus point of having visited Wells so often is that I’ve sussed out where the free car parking is. Yes, it’s a few minutes to get into the centre, but it’s also the difference between giving the local council money or local traders.

Which is what we do when we’re in the area – at Whin Hill Cider, a couple of preferred coffee stops, local fruit & veg shops or bakers or the locally owned mini-market.

After a couple of stops to make small purchases, I made my way down to the harbour and then along the footpath that follows the road down to the beach. The last time I was down here there were some serious television vans down there making a commercial for Lloyds Bank.

Not today though. The car park was filling up and there was a stream of people heading to the beach and in some cases coming back again because of the restrictions placed on walking dogs on that nearby stretch of beach.

It wasn’t long before Caroline appeared, a good move on her part because it wasn’t long after that a cycling club turned up and filled the rest of the bike racks outside the cafe.

This had had a makeover since out last visit and was now apparently being run by the Holkham Estate. Although tidied up, it hadn’t gone all hipster beardie on us and the prices were still quite affordable, hence the numbers sheltering from the sun in the cafe and the greater numbers sitting outside and slapping on SPF 30.

Once lunch was over, we hit the beach. Well I did for a few minutes and Caroline did for a lot longer. I still have problems walking on soft sand following that stroke a few years ago, but I was also conscious that there were a heck of a lot of people around, so the beach wasn’t as quiet as the ones I’d been walking on in Northumberland a few weeks beforehand.

Ice cream was the order of the day when Caroline returned and we were both rather intrigued by the Wash ‘n’ Wag device pictured above.

Wet and sandy dogs go in, very wet and clean dogs come out, much to amusement of those gathered around, especially when the dogs came out and start the usual rigmarole associated with shaking themselves dry.

With Caroline heading back to Deepdale on the bike, I was put in charge of finding food for the evening meal. Well two evening meals actually as I ended up buying stuff for both  Tuesday and Wednesday night’s cooking sessions.

When it came to Wednesday, Caroline was back on the hire bike, heading this time in the direction of Holkham Hall. As I’d had a sleepless night because of the heat (despite the fan in the room being on all night), I drove down, bought some coffee and started to read a couple of short books on the iPad’s Kindle app.

Not only does the cafe do good coffee, they also do a very good sausage baguette. Coffee and one of those came and went for lunch whilst Caroline chose something with a rather more healthy attitude to go with her coffee.

Once done, we made arrangements to meet up for coffee and cake at the cafe near Creake Abbey. This has also had a makeover, but the coffee and cake were first class and not out of the way expensive either.

With time running out on the bike hire, it was time to head back to Deepdale. Whilst there were thoughts of staying on another night, we decided not to.

Which was a good move as we awoke to find that it was throwing it down. A brief respite gave us the chance to make a dash to Deepdale Cafe for breakfast and then head back to pack our bags and head for home.

We’d enjoyed the break and the changes at Deepdale will ensure that we’ll return for more of the same… And to take photos of the revamp!

Next up  – Two days, hostel and hotel, a new tyre and lots of rain!

Now, where were we?

Normal service will resume on Wednesday after last week’s unplanned trip south and the double whammy of a tooth abcess!

Hit for six by the latter as it happened on a Sunday, but I had a tube of Bonjela and a bottle of clove oil in my washbag and some scrounged paracetemols to take the sting out of the pain.

The irony? I’d just had a dental check-up on the Thursday! D’oh!

Sparky, boilers, decorating and alarms that go off in the middle of the night!

The sparky’s been, sorted out and replaced the  switch that was causing problems earlier in the week and plans have been made for another switch and a socket to be replaced too.

No hot water. One call later to our boiler installer and the matter was almost sorted as we had hot water again once various stages had been gone through over the phone.

Twelve hours later and the boiler was serviced and AOK – the problem had been with the local water pressure and not the boiler.

In between these two, we had a trip to our local B&Q to get the items needed for some decorating. And a new bulb for the light in my workspace.

One brighter bulb was bought, fitted and is doing the job, even though the stylish wire lampshade had to be removed to get the bulb into the light fitting.

It may be a bare bulb in there, but it’s still stylish and the future’s brighter than it was!

B&Q‘s staff did a great job in answering our questions and pointing us in the right direction for the items needed and also came up with a couple of suggestions as to how other things could be sorted out.

The alarm sensor on the landing went off at 3am this morning.

Nobody was making toast or cooking kippers, but we were woken up by the screech and I suspect that the neighbours also had a disturbed night’s sleep.

Then it dawned on me. I’d had this happen a few years ago when I had a flat in Skipton – it was a warm night and whilst windows were open, there wasn’t much airflow. The house was stuffy and the alarm went off. Loudly…

Other windows were opened up and the air started to flow. The alarm box eventually shut up, but that may have been the result of my silencing the box when the push button reset refused to work! Keith 1, Alarm Sensor 0.

I somehow suspect that it may be an early night tonight to catch up on lost sleep and that a glass from a bottle of carefully chosen Tawny Port might just help matters!