In praise of … Osprey Farpoint 40 packs 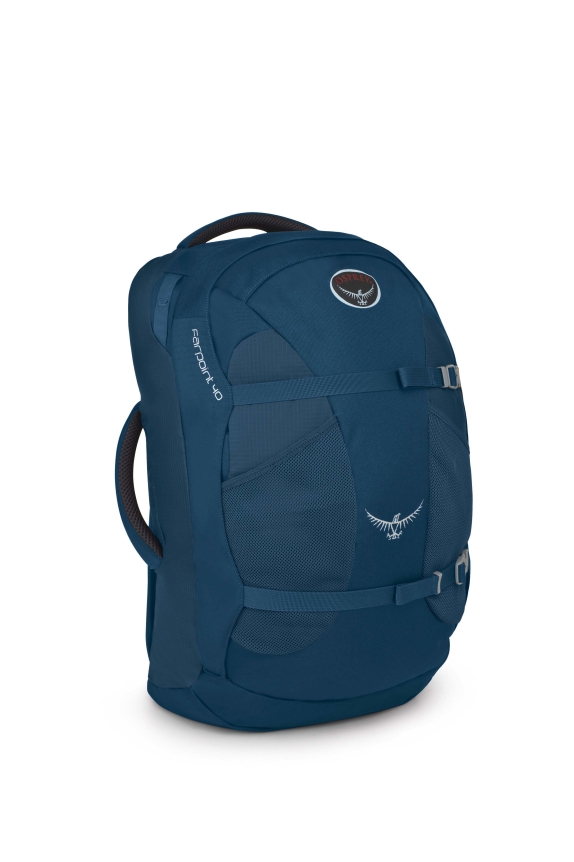 When Caroline and I were looking for travel packs last year, there were a couple of contenders.

At the time there was a lot of chatter about carry-on luggage on Lonely Planet’s Thorn Tree Forum and the name of the Osprey Farpoint 40 kept cropping up, so I investigated.

The size and capacity of the Farpoint 40 matched the criteria I was looking for and whilst I would have preferred to have bought it in a bricks & mortar store, I couldn’t find a local stockist that had one in at the time… so I hit the internet.

As I’d been used to getting packs through the post to test for a variety of magazines over the years, I was used to trying on and assessing packs from cold rather than trying on as many as I could before making my mind up and prising the card out of my wallet.

So the order was placed for the black version of the Farpoint 40. I got it, filled it, tried it and gave it a good going over before I showed it to Caroline. She took a look at it, tried it and looked at it again and decided that yes, she wanted one! In blue…

Both of our Farpoint 40 bags proved themselves a few weeks later – two weeks in Portugal travelling hand luggage only on TAP Portugal who have an 8kg carry on weight limit.

As the trip involved a mix of accommodation that included guest houses, small hotels, pousadas and hostels, we had to pack accordingly in order to kind of stay in the expected dress code for the pousada nights in Sagres.

End weights? Caroline’s bag came in at 6kg, mine at 7kg (I had the guide book and the charges/adaptors for our Kindles, cameras and Caroline’s smartphone). The beauty of the Farpoint 40 is down to the care and attention that’s been put into the design and construction of the pack.

The back panel unzips and rolls away to reveal a pack harness with adjustable shoulder straps, hip belt and chest strap (that incorporates an emergency whistle). The main section opens to reveal a space that takes enough wash & wear clothing plus a spare pair of footwear to last a weekend, a week, a fortnight or longer.

Compression straps are fitted to cinch in the contents of this section and there’s a large zipped mesh pocket to help keep worn and unworn clothing separate from each other.

The flap on the front of the pack opens to reveal a laptop or tablet sleeve that’s both zipped and padded, an organiser pocket behind this that can be used for paperwork, notepads or sketch books whilst the space in between this tech sleeve and the pack’s outer surface can be used to stash snacks, guidebooks, tissues, suncream or body sprays for use during the day.

On the outside of this section is a top pocket that I’ve used to hold my liquids bag, my meds bag, my camera and my keys before heading into airport security. Once there, it’s a simple matter to place these in a tray for examination and X-Ray and to put them back afterwards.

Also on the outside of the bag are two mesh bottle pockets and two compression straps that can help with the bag’s packed sizing, a useful measure in the event of being faced with an airline’s pack size cage at check-in or the boarding gate.

All of the zips on the Farpoint 40 have extended zip pullers and those for the lockable main zips are large enough to use with gloved hands. The top pocket mentioned in the last but one paragraph can’t be locked on my example of the bag, but once I’m out of the plane and the airport, any contents are placed inside the main body of the pack for safe keeping…

Caroline’s version of the Farpoint 40 is a slightly later model than mine as hers has a removable shoulder strap to help carry the bag without opening the back panel to use the main harness. There are however good grab handles on the top and one side of both of our bags, allowing for easy pulls out of overhead lockers or a coach’s cargo bay.

All of these features combine to form one of the best bags that I’ve used in the last few years. I have another 40 litre travel bag and a larger 60 litre one and I have sold a variety of similar sized travel bags too, but nothing really comes close to this one. Is it a perfect travel bag? Could be…

Both of our bags were easy to shoulder and walk with last year, a factor that ensured that we only took one cab during our time in Portugal for example. All we did when we got off a bus or train was to reveal the harness, sling the bag over our shoulder and walk. Organising the contents in each bag was easy using the compartments and the pockets.

As we don’t carry too much tech, the padded sleeve came in useful for paperwork filing – papers such as plane tickets, hotel confirmations and travel times or maps were in the sleeve whilst the polythene folder with the older stuff or the papers to use later in the trip were stored behind that sleeve. I also used a set of Rohan packing squares to provide a bit more organisation to the proceedings.

Do we like our bags? Oh, yes. So much so that they’re also used when we’re heading off at home too. They’re packed and then slung in the back of the car. The size and capacity of the Farpoint 40 bags ensure that we’re not overpacking for a week away as we have found out that less can be more… and that concept works too!

Osprey Farpoint 40 image courtesy of Osprey via Spring PR – thanks!