Does my flag look big on this?

Friday in Lisbon and the flags were flying as we ventured on foot in search of Museu Calouste Gulbenkian and Centro Arte Moderna. We negotiated Parque Eduardo VII with ease and having found the viewpoint seen above, we were confident that we were on the right track.

Or so we thought. A nearby map directed us on our way and after about half an hour, we decided that yes, that was the wrong way, so we retraced our steps, cooled off with a couple of glasses of a very fine mint flavoured iced drink and found the right way to the museum and art gallery.

Yes, I know what I said yesterday about museums and galleries, but having read up on both places, I reckoned that even I could find something of interest in one or both sites,  especially as there’s a connection between Museu Calouste Gulbenkian and my home city of Durham here in the U.K.

The prospect of seeing fine Oriental and Western art was intriguing, but in the end I ended up finding a seat as Caroline made her way around the apparent one-way system in the museum. Was I disappointed by the items on display? Not really, it was just that there was so much of it and I found myself slowly, but surely losing interest in what was laid out before me…

As my day bag had been left in the cloak room, my Kindle wasn’t on me so I ended up pondering some ideas for our next big trip. Yes, it was back to Portugal in the last couple of weeks of September 2015, but it was probably going to be a road trip with Porto and Coimbra as two of the stopping off points as we made our way around part of Northern Portugal.

Once reunited, we had a rather decent lunch in the cafe at Museu Calouste Gulbenkian before we made our way over to Centro Arte Moderna. Most of the artwork here is by Portuguese artists, but as the guidebooks also promised the potential to view works by Hockney and Gormley, I was game for a good look around.

One or two pieces caught my attention, but that was about it. I did take in every part of the viewing spaces and looked at the items on display, but it was no use. There didn’t appear to be any kind of connection forming and if there were works by either Hockney or Gormley on display then I well and truly missed them!

Coffee and cake in the cafe partly made up for the disappointment, as did the wander around the gardens outside.

Two of life’s great mysteries were also pondered – why were the aircraft heading into Lisbon Airport always flying so low over this part of the city and what were the chances of a frozen crapsicle hitting something or someone if it left the confines of an aircraft’s toilet (I thank the writers of CSI New York for putting that thought into my head by the way!).

Given that we’d had trouble finding our way there, we decided on a different strategy for the way back to Lisbon Dreams. A visit to the major department store wasn’t wonderful and whilst there was a multiplex cinema downstairs, there was nothing showing that we fancied. So it was time to hit the Metro once more to head into Lisbon centre to find some coffee and have a siesta.

Our meal for the night was another vegetarian one. Not at Terra this time, but in the interesting surroundings of Os Tibetanos, part of a Buddhism school in the Rato area.

We didn’t have a booking, but that didn’t matter, even though the restaurant was rather busy. We’d both had meat courses as part of our lunchtime meal, so going veggie wasn’t a problem. Misplacing the receipt means that I can’t let you know what our menu choices were, but I do recall that the two of us ate well, had desserts and good coffee to round off the night…

And so to Saturday and our final full day in Lisbon.

We’d not seen much in the way of beaches on this trip, so we decided to get the train from Lisbon to Estoril, walk from Estoril to Cascais and then get the train back to Lisbon from Cascais.

Sounds easy and it was. The Viva Viagem cards worked a treat at Cais do Sodre station and passed the ticket inspector’s examination too (always a good sign) and it wasn’t that long before we reached Estoril.

Now I know Estoril as being the former home of the Portuguese Grand Prix from my days as a fan of Formula 1, but it’s got a literary connection too.

Writers Graham Greene and Ian Fleming were stationed in Estoril during World War II. The latter apparently spent time observing double agents frequenting the local casino in Estoril and this gave him an idea to write a book – Casino Royale. The rest is history… 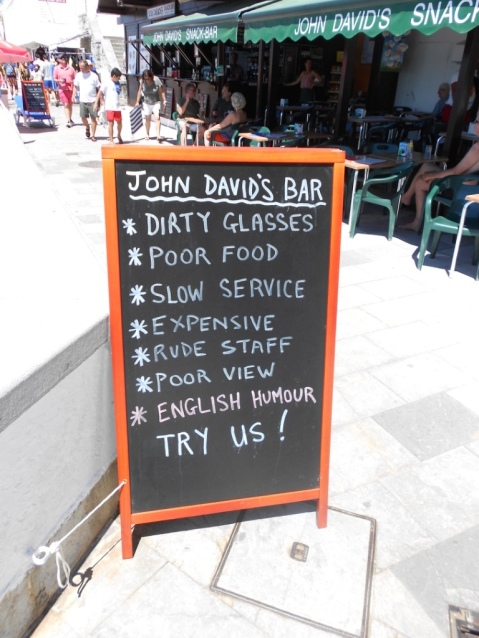 The walk from Estoril to Cascais isn’t a long one and easily done, even on hot summer Saturdays when it’s not just mad dogs and Englishmen going out in the midday sun.

Factor 50 proved useful once more, as did the bar selling cold Coke Zero colas and equally welcome Magnum ice creams. A taste of home? Almost in both cases.

The beaches were starting to get busy as we approached Cascais, but some were already showering themselves and their rather disgruntled Yorkshire Terrier as a means of flushing the salt water away and freshening up before heading home.

On reaching Cascais, we wandered for a while before we noticed a ceremony taking place involving quite a few people in different outfits and gowns in the main square. It looked like a university graduation ceremony, but it was in fact a ceremony to celebrate the local wine producers and their respective products.

The gentleman who informed us of the meaning behind the ceremony not only allowed us to sample a couple of different wines, but he also gave is a small insight into the Portuguese wine industry.

Although we’d sampled a couple of diffferent wines in the two visits we’d had to Portugal at that time, our main introduction to the country’s wine had come in the 1970’s thanks to the wine that ended up as a major source of home made table lamps amongst certain consumers of the product at that time – Mateus Rose…

Although we’d looked at menus at both an Irish pub and a local curry house, Jardim de Frangos came up with quite a decent piri piri chicken lunch and a bottle or so of beer to wash it down with.

At the time I was wearing a decent pair of Transitions lensed spectacles that had gone dark thanks to the strong sunlight, but that didn’t stop a street hawker who came inside the dining area from offering to sell me a pair of cheap sunglasses.

The waiters chased him away, but my somewhat direct comments afterwards appeared to amuse the two German ladies sitting at an adjacent table…

With the heat still rising, we took a look around a small festival in an adjacent park before heading back to the station for the train back to Lisbon. Packing the bags didn’t take long and neither did the discussion concerning where we were going to eat that night.

We’d discovered Ristorante da Vinci on our first trip to Lisbon. It’s not in the guidebooks as far as I’m aware, but it’s always been busy whenever we’ve either eaten there or walked past at any time of the day.

The clientele is also usually a good mix of locals and tourists from both sides of the Atlantic and whilst most are anonymous, at least one Hollywood actor has been spotted in there when Caroline and I have been customers.

Pizza for me, pasta for Caroline, desserts and either beer or wine then coffee usually round off the meal quite nicely. This was our second meal there, but since that night, we’ve made two return visits as Lisbon ended up being our in and out point on our road trip in September 2015…

After checking out of Lisbon Dreams on Sunday morning, our Viva Viagem cards saved us money once more as we used the Metro rather than a taxi to get us to the airport.

When we’d made the same journey in September 2013, it was on the night before our flight home as we ended up sleeping in the Lisbon Airport terminal as we couldn’t find a place to stay for that last night. Not a mistake we were going to make twice!