Yes, I know that it’s quite a while since Caroline and I visited Isle of Man, but there’s been quite a few adverts and programmes on television over the last couple of weeks here in the UK highlighting the island and its many charms.

As well as coverage of the iconic TT Races over the last fortnight – the build-up, the classic races of recent and not-so-recent years, profiles of current riders and legends such as Carl Fogarty and Steve Hislop, there’s been segments shot on the island in programmes fronted by bike nut Henry Cole – Find It, Fix It, Drive It on More 4 and The Motorbike Show on ITV4.

It’s been a while since I last rode a motorbike (1975 to be exact, around the back lanes near Glenridding in the Lake District), but I suspect that now would not be a good time to give it another go thanks to some small balance problems after having that stroke in 2004…

Our journey to Isle of Man started with a train ride to Liverpool and a wander down to the Hampton By Hilton hotel once we arrived. After checking in, we headed out to explore the area surrounding the hotel.

There had been a small festival taking place on that Sunday, but it was winding down as it was nearing 6pm, so we contented ourselves by just strolling around and seeing what was out there. As we’d not had lunch we were on a mission as we were beginning to feel the need – the need to feed!

The pub we’d spotted earlier in the day had already stopped serving food, so a nearby group of restaurants looked very, very tempting. Yes, they were chains, but by that time we were passed caring…

No tables were available at our preferred choice, so we ended up going to another pizza place a few metres away. Calamari was tried for the first time, but after polishing off the bowl, Caroline and I came to the same conclusion – what was all the fuss about?

Our respective pasta and pizza courses were more impressive, as were the desserts and the coffee that rounded the meal off. Yes, it was a budget busting bill, but hey, we were hungry and that’s all that counted at the time we ordered the food, wine and beer.

After a good night’s sleep, breakfast really set us up for the day, but not in the way we expected. Yes, Caroline went for the light option and I opted for the full English, but we ended up making different coffee choices.

I’m not a fan of machine coffee, but I tried a black coffee with some cold milk and it didn’t impress. The next cup though did hit the spot, largely because I hit the Espresso button three times before adding a smidgen of milk. Not perfection, but a distinct improvement on that first cup!

As we were getting ready to head back upstairs for our bags before checking out, one of the restaurant staff invited us to help ourselves to croissants to take away with us. Whilst we grasped a couple each for lunch, the lady offered us a couple of paper bags and napkins to stash the croissants in.

So there is something to the concept of getting a free lunch!

Once we’d retrieved our bags and checked out, it was time to head towards the sea cat Manannan for our shortish hop across the Irish Sea.

One of the first things we noticed after landing at Douglas was the friendliness on Isle Of Man, starting at the aptly named Welcome Centre when we sought and bought our travel and heritage smart cards.

This friendliness continued as people stopped to ask whether they could help us as we made our way to our hotel, searched for eating places and started to use those smart cards. It was our own politeness though that bagged us the last two seats on the Manx Electric Railway between Douglas and Laxey the following morning.

We’d normally leave such an impressive sight such as Laxey Wheel until near the end of our trip, but we had seen the ten day weather forecast for the island and it did not look good. So Laxey it was for the first part of the day out and the summit of Snaefell the rest.

Caroline had seen Laxey Wheel before on a previous visit to the island thirty years before our visit, but I’d only seen it on Coast, World’s Greatest Motorcycle Rides (that man Henry Cole again…) or in photographs.

Once seen, Caroline’s insistence we head there was fully justified.

You can see the wheel just from the entrance gate and there were many people who did just that, but got not further than the gate. Once inside the gate, you get the feeling for the scale of the wheel known as Lady Isabella and for the site beyond the impressive water feature.

After a coffee in a nearby cafe and lunch in the Laxey station cafe, the next phase of the day kicked in – a ride to the summit of Snaefell and back on the Snaefell Mountain Railway via The Bungalow, just one of the many notable places on the TT Mountain Course.

Walking around on the summit brought some impressive views as were luckier with the weather than Julia Bradbury and a film crew had been whilst filming a programme segment on Snaefell for ITV.

We had been lucky with the weather, but had come prepared with mountain jackets in our day sacks and by wearing fleeces and walking trousers rather than the t-shirts and shorts favoured by some fellow explorers.

We weren’t that lucky the following day though when we visited Peel – those waterproofs did come out of the packs. Caroline made good use of the heritage aspect of those smart cards whilst I hit the motorcycle museum, had a kipper bap for lunch and sheltered in cafes so I could rest my left leg that was complaining after being cramped on the trams the previous day. 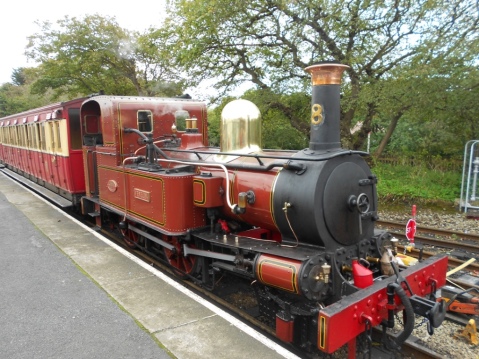 Thursday’s visit to Port Erin on the steam railway was a delight. Fine weather, a good lunch next to the beach and plenty of fresh air made the day, which was just as well as the weather closed in for the rest of the week.

We did make it to Castletown and Ramsey, but the rain gods had the final word on those days. Saving grace? Crossing the TT finishing line  – on a service bus to Douglas rather than on a high powered motorcycle!

This is just a taster about Isle Of Man. There will be more over the next couple of weeks when I have days off. We will be returning to Isle Of Man, but in the summer months and we will take the car so we can do the whole of the Mountain Course and explore the parts we didn’t get to…

It won’t be over the TT weeks or when there’s other racing taking place. These will be watched at home if for no other reason than we’ve seen what the hotel rates are for those particular times when fans head to Isle Of Man to watch the racing and their heroes at play…