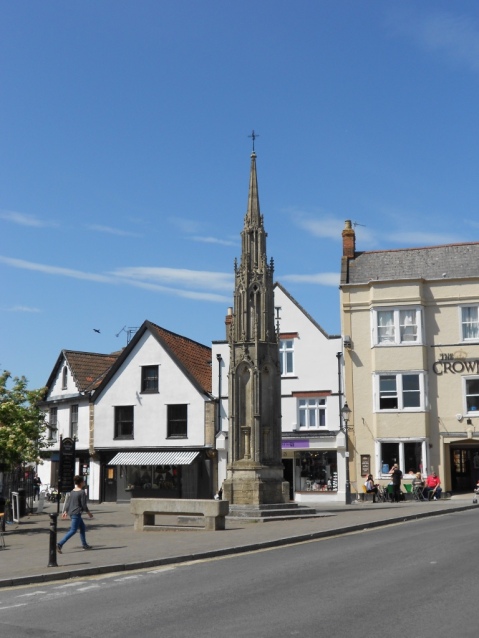 Glastonbury – before the festival crowds arrive…

As we were in Somerset, we deemed it appropriate that we should visit Glastonbury to see what all the fuss was about. The town, not the festival as that had sold out months ago.

With Caroline heading off on Betty Bike, I pointed the car in the right direction to ensure that the Skoda version of Thunderbird 2 could be used for a rescue job if my mobile rang.

Caroline and I are used to heading into towns with reputations as being favourable with those seeking alternative lifestyles. We’ve visited Totness in Devon and we could see where people were coming from when they argued that Totness had been twinned with Narnia.

Closer to home though is Hebden Bridge, a town with several strings to its bow, although most will normally associate the town with the damage caused to shops, housing and infrastructure by flooding in recent years.

Getting to Glastonbury was easy, but it was interesting to note that several big name outlets are clustered together in a development on the edge of the town, leaving the centre almost free from the usual suspects found on the average UK high street.

Caroline and I had reached Glastonbury at virtually the same time, but we’d parked up about half a mile apart so it was I that had the first stroll around the streets as a means of getting our bearings.

Gift shops were tasteful, New Age shops interesting and cafes were spot on with coffee and food that didn’t rely on the meat factor. Our wander around took us into a well-stocked green supermarket with good lines in food, alternative cleaning products, competitively priced tea tree & lavender oils and a fine selection of chocolate and snacks.

One toy shop had a sale – for the gold/black/sparkly dragon that now sits on the top of the bookshelf in the lounge and The Lazy Gecko Cafe came up with a fine line in non-alcholic drinks, food and coffee plus a small piece of artwork for display on the landing at home.

Now we were aware of the Glastonbury associations with hippies and a few of the cafe’s clientele appeared to back that up. So much so that we reckoned that they were original models who had found their niche back in the day and had stayed there!

Another customer though was of a more recent time – a former MP who made a name for himself whilst in Westminster. He’s not been seen or heard of for a while, but somehow I guess that he will be back in the limelight eventually. The name? That would be telling!

Once the lazy Lazy Gecko lunch was out of the way, Caroline wandered around Glastonbury Abbey whilst I hit the shop (no purchases made) and took in some more of the book I was reading on my Kindle.

Once back, Caroline took to the saddley thing once more and we both headed back to Dragonfly for coffee, showers, food and sleep – in that order. Although we had both come to the conclusion that Glastonbury was like Hebden Bridge on steroids! 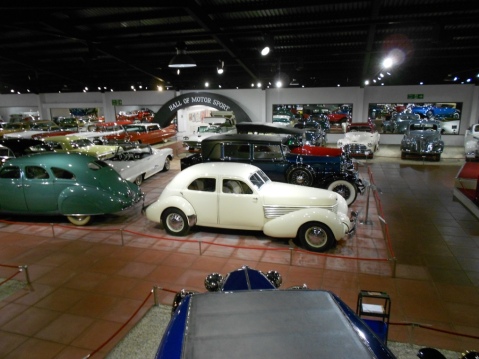 The Haynes Motor Museum near Brookhampton

Friday was a lazy day as we knew that we had an early exit and a long drive on Saturday. I’d been keen to visit The Haynes Motor Museum on our previous visit to the area, but it wasn’t to be as we ran out of time and some development work was taking place at the museum.

It’s big, it’s well stocked and the cars on display are kept in immaculate condition. It’s like a history of motoring in there with classic cars from well before I was even born to more modern cars that I either recognised from fleeting glances as they passed my dad’s car on the motorway or from photos in papers or magazines in my schooldays.

Although I’ve had cars such as the Mini, VW Golf Mk 1, Ford Fiesta and others, it was more exotic machinery that caught my eye – the Jensen Interceptor, Aston Martin Lagonda plus cars by Alfa-Romeo, Lotus, M.G. and others.

Schoolboy dreams of owning at least one of the above – the Jensen Interceptor – never materialised, but hey, was it wrong to dream? Forty years later, I’ve learned that practicality in a car is worth a lot more than the potential to pose and pose and pose…

A good museum is always worth a visit (if only to revisit Amnesia Alley) and there’s a fine and reasonably priced cafe plus a gift shop to appeal to petrolheads and those of a more sensible nature.

By Saturday morning, home was beckoning and more travel plans were formulated and distilled as we made our way back up to Yorkshire…

The first two destinations will be highlighted on here next week!

I’m a writer and photographer who has worked in the tailoring trade and the outdoor/travel clothing, equipment and footwear game. Past lives include working as an outdoor instructor, managing three bands and doing PR work through an agency or my own contacts. Was a student in the mid-90s and I'm originally from the North East, but now based in Yorkshire and back in retail with a travel and outdoor activity based retailer.
View all posts by Keith Rickaby »
« Previous post
Next post »