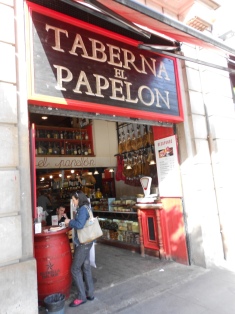 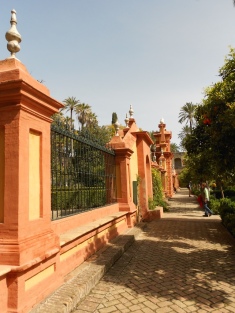 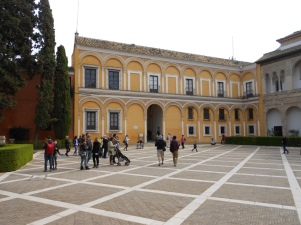 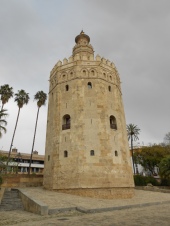 Some of the many faces of Seville – which is why we’re going back!

Our wish list for Seville was a short one – see the Metropol Parasol, visit the Real Alcazar, have tapas for the first time, take in at least one flamenco performance and (in Caroline’s case) pay a visit to the Cathedral.

Our bus from Malaga reached Seville in late afternoon and it should have theoretically a half hour walk to our digs for the next four nights.

Following a brief siesta,we  scrubbed up and then hit Seville. The district we were staying in – Barrio Santa Cruz – had a few roads through it, but the more interesting parts were linked by narrow footpaths flanked by shops, bars, restaurants and hotels.

So we wandered and did more of the same as a means of getting our bearings and trying to find a place to eat later on. After investigating a few places, we settled on a tapas bar just a few hundred metres from our digs.

Ordering beer and wine was easy, but choosing which tapas was a different matter. Sea food was out as neither of us partake, but it wasn’t that hard to find seven tapas choices.

Ratatouile was one, spinach topped with an egg and small ham chunks was another, but as the dishes kept on coming, we weren’t all that worried as we’d only had a snack lunch on the bus from Malaga. Seven empty bowls later, we were done. Or were we?

Although I’d had a couple of beers and Caroline had had a large glass of wine, I decided that we should have a glass of manzanilla to round off the evening instead of coffee.

We were fed and watered later than we would normally be at home, but we were still a couple of lightweights compared to locals who were just heading out as we headed back.

After a side visit to a small shop for some bottles of water and chocolate we started to unlock the room door, but were stopped by the pension owner.

He explained in broken English that the room above us was getting some emergency work done on it and that this was starting early on the next morning. We could have the downstairs en-suite instead, so we collected our barely unpacked bags and accoutrements and headed downstairs.

A bit of clothes washing was done before we turned in for the night, but fortunately most of the stuff had dried when we noticed the ‘No clothes washing‘ sign on the back of the room door. Oops…

With just washing and dressing to do the next morning, we got an early start.

Which is just as well as we needed to find somewhere to have breakfast and the first coffees of the day. Help was at hand though as a guy doing some touting for a walking tour tried to do his thing and tempt us onto the tour.

When we explained that we were looking for breakfasts, he pointed us in the direction of the place he had his breakfast every day – Taberna El Papelon (see the pic above). “Look for the red canopy” were his parting words as we headed off after thanking him.

We were the only Brits in the place, but we got our fresh orange juice, coffee and toasted croissants and jam without any difficulties and ended up with a sub-€8 bill for everything. And it was a pretty good way to start the day.

Although we weren’t heading anywhere in particular, we found ourselves outside a civic building that was the scene of a worker’s protest. We never found out what the gripe was, but we did get approached by a couple of Americans who were eager to talk to us and find out some opinions from us.

Yes, you’ve guessed it – Southern Baptists on a mission from God…

After answering their questions and Caroline commenting on the deck of cards they were using to help them in their quest, they realised that we’d got thoughts on religion that didn’t tally with theirs (both of us have been there, seen it, done it and walked away from different religious backgrounds) and we agreed to disagree.

With that settled in a very friendly way, we continued on our meanderings and then realised that we were almost upon the Metropol Parasol. After crossing the road to it and exploring the structure from the ground and the market at that level, only one question remained – how the hell did we get up to the walkways on the top?