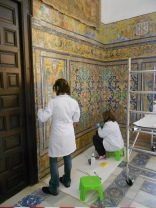 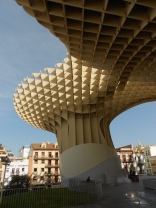 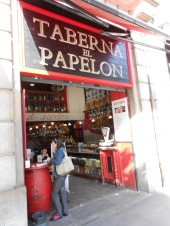 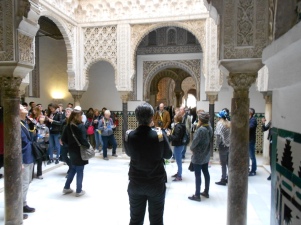 We may have stumbled across the Metropol Parasol (middle picture on the top row), but after half an hour of wandering around under the structure and exploring the market hall, we had yet to find the entrance hall and the lift to get up onto the walkway up top.

Yes, you’ve guessed it, we’d walked past it as the entrance hall is underground and we’d missed the signpost at street level that would have put us in the right direction.

At €3 each, the admission charge wasn’t going to break the bank, but there were a couple of add-ons that made it even more worthwhile.

Apart from giving us access to the walkway, we also had a free beer each from the tapas bar at the top and a free postcard to collect from the shop in the Parasol’s basement area.

We spent a fair amount of time on the walkway. Some of that was just taking in the views and taking the occasional photos whilst the rest was having to wait for a bunch of hipster beardies to take what appeared to be their obligatory selfies on their mobile phones.

Not only were they taking a lot of selfies, but this flock (or should it be herd?) of beardies were also rather oblivious to the fact that there were quite a few people trying to either look at the view from the viewing section or trying to take their own photographs of the view rather than shooting themselves…

After free beer, postcards and plenty of time spent soaking up the sun and the views on the Parasol’s top deck, we headed back down and found a cafe for a light lunch and more wandering around. 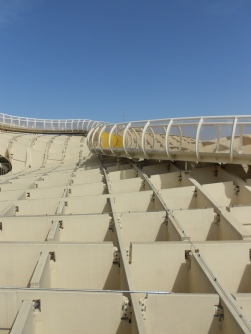 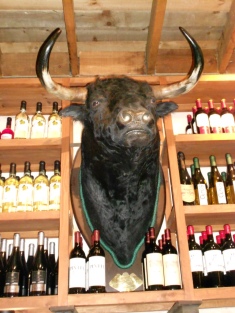 We weren’t using street maps to get around Seville as we found it easier to just roll the dice and see where we ended up. This first day in Seville was like all of the others spent in Spain – free and easy without any real need to hare around all of the sights listed in the various guidebooks we’d read before we got on the plane to Malaga.

€9.20 for two ice cream cones? You’d better believe it, but they were probably the best ice creams that we’ve had and they also came with a pretty high standard of presentation too…

So what next? A mooch back to the digs, where we opened our room and initially thought the worst as none of our bags, clothes or other kit was anywhere to be seen.

When we found out what had happened, our shock turned to something else. Our kit had been moved back to the room we’d been in originally and whilst it was all in order and nothing was missing, we’d have appreciated it more had the owner waited until we got back and allowed us to move our kit ourselves.

Once we’d raged silently against the machine, it was siesta time, reading time and then wash and change time before heading out in search of our evening meal. Although we’d looked at a few places during the day, we wandered around for a while as most places were relatively empty, even though by now it was around 8.30pm.

One place had caught our eye, but we’d wandered on and then retraced our steps until we got back to Bar Pelayo – we took to calling it The Seven Bulls Heads – yes, seven bulls heads on the walls and plenty of memorabilia relating to bull fighting and bull fighters.

Bull fighting may not be to everyone’s tastes (it’s not ours), but it is a way of life in Spain and has been for a heck of a long time. I remember my aunt visiting Spain in the 1960s and talking about El Cordobes and bull fighting whilst a regular film at my local cinema’s Saturday morning film club was Tommy The Toreador starring pop star Tommy Steele.

Beer and wine were the drinks of choice for the night and whilst a couple of tapas dishes were the same as the night before, there were two that I indulged in that really hit the spot.

The first was gazpacho and the second was baked goats cheese. With ratatouille, spinach, tortilla and chorizo also on the menu, we didn’t need a sweet course, but did indulge in another beer and wine each before wending our way back to the digs that we don’t mention the name of for some light reading and a couple of soft drinks before we turned in for the night.

More on Seville next Wednesday…