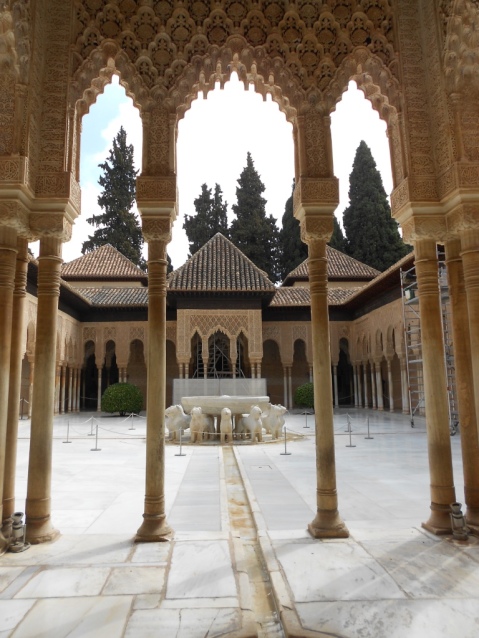 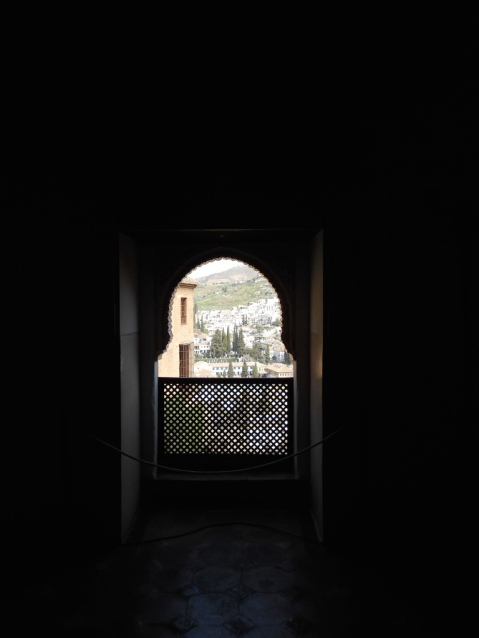 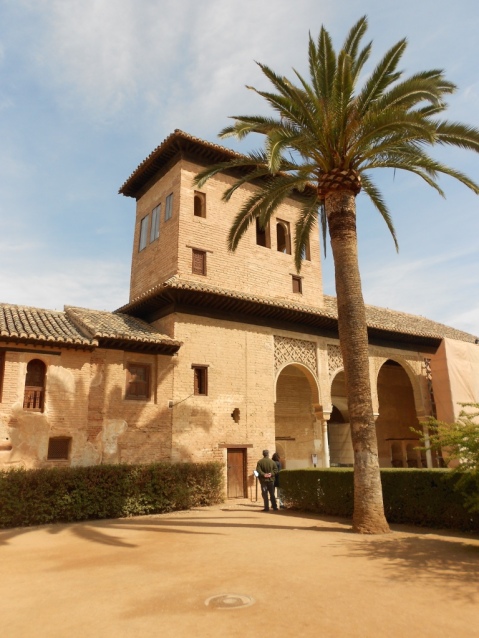 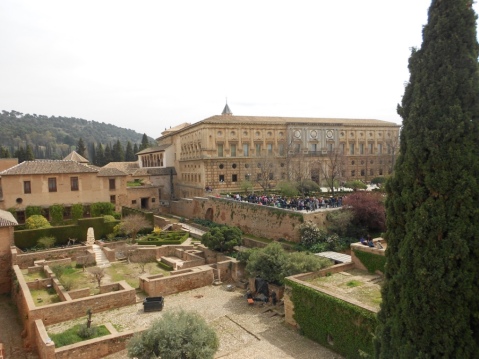 I make no apology for making this more of a picture based post regarding our visit to the Alhambra Palace.

So much has been written about Granada’s World Heritage Site by those who know more than I do (Rough Guide Andalucia devotes @ six pages including maps and photos to the site, as does Lonely Planet Andalucia).

Our visit to Alhambra was booked back in January 2017, and yes, that was a wise move as the Sold Out signs were already posted when we collected our pre-booked tickets around 9.15am.

As our allocated time to enter Palacios Nazaries wasn’t for another couple of hours, we had time to wander over towards it, taking in the gardens, and second breakfasts too.

Whilst we’d had a spot of breakfast back at White Nest Hostel, there wasn’t much of it about thanks to the school or college party that had almost cleaned out the breakfast buffet selection.

A couple of bread rolls with marmalade and a cup of coffee weren’t going to set us up for the day, so coffee and a vending machine snack topped up the energy levels enough to last us until lunchtime.

Although I’d visited Alhambra back in 1999, there were only a few parts that I remembered seeing on that visit. With so much to see and take in, we took things nice and slow in the run up to joining the queue in readiness for our slot to get into Palacios Nazaries.

After queuing for a while and a bag check, we joined those starting to wend their way around the complex. We did hang back a bit because we’d noticed the amount of people who were wanting to photograph everything and then take selfies of themselves against the same views or interiors.

Taking things slowly had its advantages. We saw more than those doing Roadrunner impressions and had time to take things in. There were a couple of times when we couldn’t get into certain rooms, but we just held back a bit and got in when things were quieter.

We eventually exited the buildings and started to wander around the multi-level gardens adjacent to Palacios Nazaries for a while before hunger hit once more and lunch was declared.

Whilst we gave the vending machine coffee a miss this time, another machine served up not one, but two packs of sandwiches. Coffee came from the hut near the entrance to the Alcazaba fortress this time – good coffee, and rather strong too…

Once the coffee was downed, we entered the one way system in the Alcazaba, got the cameras out and then explored the fortress. I got told off for sitting on a wall rather than a bench, but once I’d found a proper seat, I could see that the wall was a bit older than the concrete I’d been sitting on at the top of it was older than I’d realised.

As Caroline and I made our way over to the Generalife and Summer Palace, my left leg started playing up thanks to some post-stroke muscle trouble, so I sat down to relax and do some reading.

Caroline headed off towards the Generalife and Summer Palace and I got more and more engrossed in the book I was reading on my iPad’s Kindle app. My phone was off as usual, but on checking my watch, I realised that I hadn’t seen Caroline for quite a while.

So the phone was booted up and I found that there’d been a missed call, a voicemail message and several texts in the last quarter of an hour…