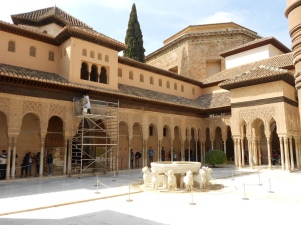 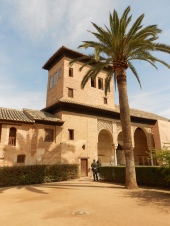 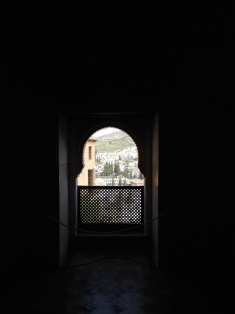 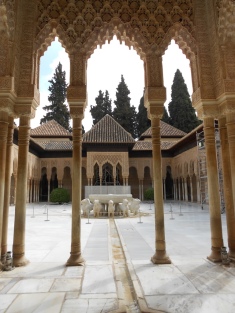 Where were we? Oh yes…

Caroline headed off towards the Generalife and Summer Palace and I got more and more engrossed in the book I was reading on my iPad’s Kindleapp. My phone was off as usual, but on checking my watch, I realised that I hadn’t seen Caroline for quite a while.

So the phone was booted up and I found that there’d been a missed call, a voicemail message and several texts in the last quarter of an hour…

Caroline had taken a wrong turn and had ended up outside the entrance to the Alhambra complex. She’d also misplaced her ticket too, so she couldn’t get back in to come and find me.

We did find each other once I’d booted up my phone and a spot of shopping in the Alhambra souvenir shop was called for and then a coffee and cake stop back down in the city centre.

We’d spotted Cafe Lisboa earlier in the day, our order was taken and coffee and some rather cake was delivered to our table. As we’d been out for nine hours, we headed back up to White Nest for a siesta, shower and change and then a search for an evening meal.

There were a few places open on our last night in Granada, but we wanted a change from tapas or even shared dishes like those served in the Moroccan place the night before.

An Italian restaurant was spotted and food and drink was duly ordered. I’d love to tell you the name of the place, but the receipt was misplaced and it wasn’t in a guidebook, but the food, drink, desserts and coffee all hit the spot.

There was once place left to go though on our way back to our room. I’d misplaced the bag containing the things I’d bought at the Alhambra shop and there was only once place it could be – Cafe Lisboa.

It took a while to get myself understood, but it was there and was handed over. As we left, a pact was made with Caroline. If we needed second breakfasts the following morning, I was buying and we’d have our second breakfasts down at Cafe Lisboa.

The mini market around the corner provided us with some soft drinks, bottled water and a bar of chocolate before we headed back to do some reading and then chase some zzzzs.

Although we were up early and packed, we didn’t have to check out until much later, so we wandered down to White Nest’s dining room and found that yes, the breakfast choices were limited again (White Nest to their credit did post a reply to my review on booking.com which apologised for the limited breakfast fodder due to the school group).

So there was only one thing for it – down to Cafe Lisboa for second breakfasts! Coffee and croissants were ordered and duly arrived – but the croissants were huge, and just as good in their own way as the pieces of cake we’d had the day before.

As we still had time on our hands, some shopping time was called for, but we also needed a cash machine as the two of us needed a few more € to cover any purchases in Granada, in Malaga the following day and any final snacks or drinks in the airport before the flight home.

As Caroline wandered around one shop looking for things to take home for her grandchildren, I picked up one item and could hear Caroline groan in the distances as I walked to the cash desk with a blue and white plush bull.

The groan turned to a longer groan and an extended eye roll when I pushed the plush in the right place and a bull sound came from within the toy’s innards… Nothing was said though, either by Caroline or the lady taking my cash to pay for the blue and white bull.

It was now approaching check-out time, so we headed back, picked up our bags and wandered down to the nearest taxi rank to get a cab back to the bus station.

Yes, it wasn’t something we’d normally do, but as we’d noticed that it wasn’t a straightforward route to the bus station, it would save us a whole lot of time.

Lunch that day came courtesy of Aldi. Their store was just a few hundred metres away from the bus station, so that was the stop of choice for both food and drinks for both lunch and the bus ride to Malaga.

Coffee levels were topped up in the bus station cafe though, but when I bought a beer too, there was a small tapas plate as part of the deal. We’d heard about the free tapas plates in Granada, but this was the one and only time we’d experienced the custom.

When the bus arrived and we headed inside, we swapped notes and agreed that we’d use buses again on our next trip around Andalucia.

Yes, the bookings had been done a few months before we travelled as a means of saving money, but we’d been impressed by the comfort levels and the on time nature of the journeys, even though we hadn’t been on the best buses on the fleet or had paid full whack for the four bus rides we’d been on.

On Saturday – Malaga in festival mode and time to go home…